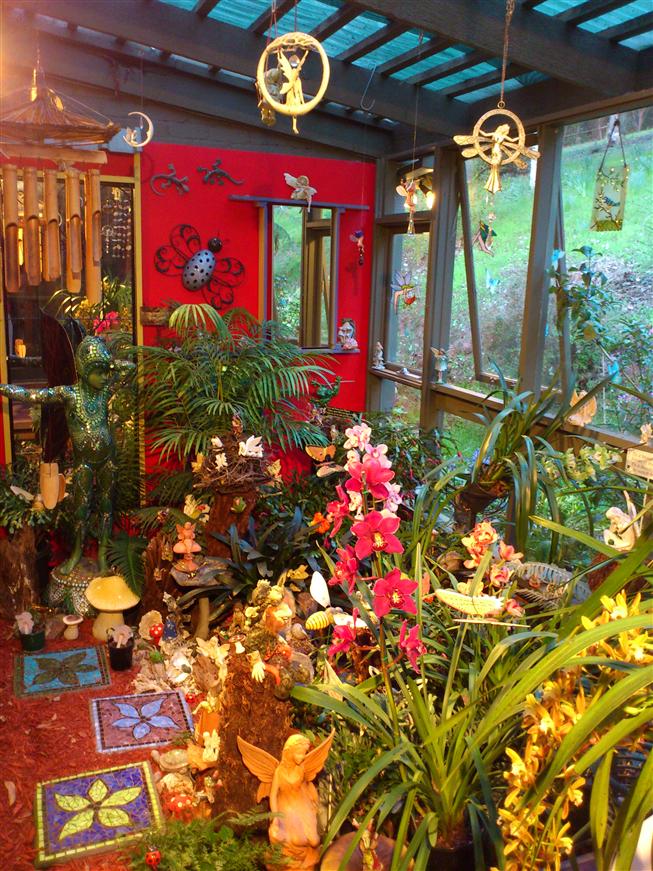 Some years ago, I bought my wife a surprise Valentine’s gift. It was a garden sculpture we’d both seen at an international garden festival. ‘Elfin’ by Sioux Dollman, caught our eyes quite independently as we experienced a walk through the sculpture garden. I caught sight of Pauline’s gaze as she became entrapped with how Elfin talked to her. Then I knew I had to get it for her. It was one of those longing looks that said, “I would love to have this fairy’ but there is no way we could afford it’.

I traced Sioux during the following week. The festival had finished and sculpture owners and attendants were taking down stalls and exhibits. I drove by en-route to the office and stopped and asked many a friendly soul through the wire fencing if they knew who the owner of Elfin was. Someone knew Sioux and gave me her phone  number. I called Sioux. Elfin was still for sale. My breath was somewhat taken away at the price. Then I had that mad flash of inspiration and said yes.

Now Elfin was  made for the garden, but once Pauline knew it was her very own fairy, she kept it in our garden studio which doubled up as my home office and guest suite. Well Elfin, now named “Joplin” was quite the subject of many conversations and photographs whenever we had guests – local or overseas.

We did a tree change and bought a semi rural property in the beautiful Yarra Valley in Victoria. Now we had to locate a new home for Joplin. My coaching business was developing and one of the processes I use is known as ROQUE.

R=REALITY NOW: Pauline had by now become a fairy junky. Every present self bought or bought by me, and then prompted to join in of others, involved buying fairy figurines. Before I met her, everything that grew in the garden was a weed. I loved gardening. Now Pauline discovered the joys of gardening and has brought more colour into our lives than I could have imagined. Pauline wanted to develop a garden not just for plants, but to place some of her other talents in art as a hobby. These included folk art painting, pottery, mosaic work, collecting trinkets for the garden, and ofcourse a variety of flowering plants.You can see some of Pauline’s hobby art in this capture. 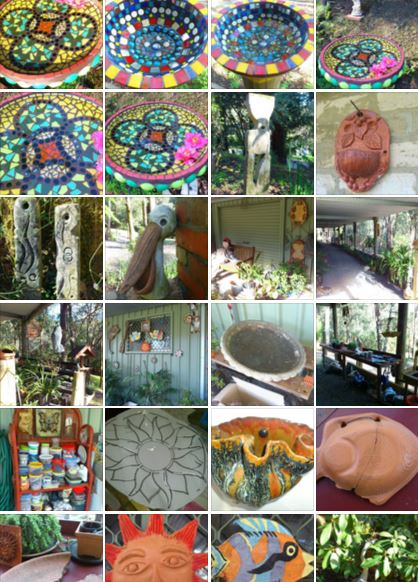 A challenge I saw was how Pauline would keep the hundreds of fairies clean from both the weather and visiting feathered friends! We had a space at the back of the house which if I ‘squared off’, could be made into a covered conservatory.  Now we had bought our ‘Canta Libre’ (name for our home) for a lifestyle and I enjoyed the prospects of really getting hands on with some serious Do it Yourself projects. A neighbour at our former home was rebuilding and I saw all the discarded windows and timber as raw materials for rural living projects!

O=OPTIONS: It seemed that with all this reality of opportunity. synchronicity was also happening. We now had the space to build garden rockeries. I could build sheds! We had glass from old windows that could be used for garden features. We had stumps of trees. We had a small fernery at the back of the house – thanks to previous owners. We had lots of wildlife coming to the house – more varieties of birds than we can to date name. Possums, wallabies, wombats, deer – Samba and Fallow. We had moved to the Yarra Valley when this part of Australia was still in a prolonged drought. So anything Pauline attempted to plant was seen as a salad bowl for our visiting fauna. Then of course we have Tiger snakes and King Brown snakes. And I am always concerned with the happy and contented wife enjoying and being transported in thoughts whilst hobbying… and what she may accidentally trod upon and be at risk.

Q=QUEST: So what should we decide and what should we do? Ofcourse! Make a Fairy garden! The concept became revealed in the reality of the fairy and plant collection, and the options inspiring projects from the windows and doors I had collected, including some mirrors from ‘hard rubbish’. I decided with head and heart to build something that whilst Pauline could not visualize because it was in my head, that she too would enjoy. So I thought: They have aviaries for birds, hives for bees, aquariums for fish, Emporiums for collections, why not a Fairyum for fairies!!!!!!!!!!!!

U=UNIQUE NEEDS: Well I had the raw materials and Pauline had this population of fairies to dance around Joplin. I needed some help with structural design so I thought I would leverage advice from my neighbour and his trade skills. I decided that this being one of those yearned for do it yourself projects for me, that I would not purchase any new materials. Instead, I would recycle! I would use the by now vast array of ‘raw materials for future projects’, – which by the way Her Madamship calls my junk! I also knew my intuition and intimate knowledge of The Maharani’s habits i.e. shopping – would see that I had to build something to accommodate future capacity!! That is, even more fairies, wind catchers, bug sculptures etcetera. I was proved right even before the Fairyum was structurally taking shape!

E=EXECUTION: Then I just got on with it. I have to say, that fairies were moving in even before I completed. Talk about pressure when this was just a hobby quest! Joplin’s location dictated the focal point. There is very little to be said about the execution process and steps as all that labour of love is lost to the love of the Fairyum Pauline is enjoying. All our visitors, babies, young children – even the eldest visitor, Artist Mimi Fry at 92 years old has been photographed inside the Fairyum examining details.

Then Pauline developed a love of orchids!

A video clip at the Fairyum!