Good valued life or a life of good values?

When we say we have values or are driven by our values what do we mean?

There are a lot of examples of ‘espoused’ values which disappear at the very moment of need! Then there values that actually cause us to make decisions in particular, confident ways.

Do we lead a valued life or a life of values?

Respect for the Individual as Human Being.

Respect for the Individual’s Life Journey to where they are now.

Respect for the Individual’s Potential.

The Pursuit of Excellence.

Openness and Beyond One-Sidedness.

We live in a Global Village of borderless Knowledge and Wisdom exchange.

When I completed an exercise in my personal values some years ago, this is what I listed as my Top 5:

I realize that the above combine values I use to guide my life and I have often thought that there could be even more to how values influence our lives. Even more than that, how we are influenced by other people’s values especially when we deeply respect them.

Growing up I was influenced by my parents and their deeply held aspirations of faith, hope and charity. I never knew where they got it from though. I guess it was a mixture of the religion they practised and the community we lived in. Cosmas and Rose exemplified these virtues in every aspect of their lives. Originally of Goan heritage, they started their married life in Mombasa, Kenya during the time of Portuguese and British colonial rule and part of Independent Kenya. All of us children were born in Mombasa. We moved to England in 1968. 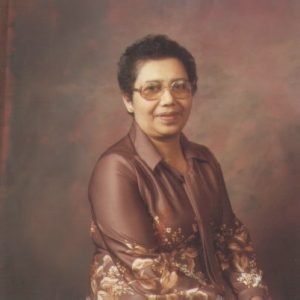 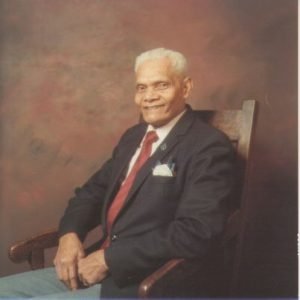 Decades later, whilst living in the UK, I discovered a sculpture that moved me very deeply even before I knew what it represented. The statue was the “mythological three charities, daughters of Zeus – identified on some engravings of the statue as, from left to right, Euphrosyne, Aglaea and Thalia – who were said to represent youth/beauty (Thalia), mirth (Euphrosyne), and elegance (Aglaea)”.

My interest years later took me to a connection between the Ancient Greek mythology and early Christianity and St Paul’s Faith, Hope and Charity / Love.

I have had pictures of the various representations of the Three Graces. Then, for our home ( with my wife Pauline) in Victoria, Australia, I discovered a garden statue. I had to have it and I created a special place for it in our garden. I referred to it as The Avenue of the Three Graces. Since moving to our current home, (I moved the arbour too!), I have a variation of that garden abode – it is still in the making!!! 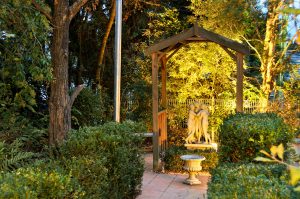 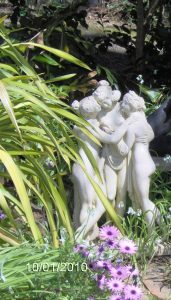 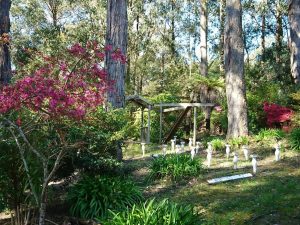 New location for the Three Graces

When I first came to live in Perth, Australia (1994), I met Luciana Russo, who has become one of those uniquely special friends. We share deeply of that which makes us bond. I always admired the paintings in the home of this Italian from Rome lady – and her love of aesthetics and culture. I found out that one of the artists of her collection was her very own sister. I explored and was stunned to see that her sister Nadia (Russo) Caleca had painted a version of the Three Graces! I shared my love of that particular painting with Luciana and passed on my compliments to the artist.

Some years later, Luciana was urging me to visit her in Perth. It turns out she wanted to present to me in person, my ‘birthday gift’! Many months past a year had flown by and Luciana’s pleadings were on the increase! What she had to give me was not to be posted or couriered! I had to receive it in person. Luciana decided to make the trip to visit us in Warburton instead! She graciously presented me with the tubular container…………and when I opened it, I was deeply moved and touched. 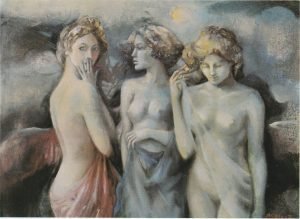 Artist Nadia Caleca has retained her original of the Three Graces, unlike other works which have been sold or shared with family and friends. It is her wish that the painting is neither reproduced nor sold. Imagine what pleadings must have gone on between the Russo sisters.

Luciana was absolutely committed to sharing this essence with me! Nadia conceded to a unique one of one reproduction and has authenticated the print. Nadia’s daughter in Rome manages a studio for the artist’s works.

I was thrilled to meet young Holly Mills at a picture framing company. Too many synchronicity moments to add to the synchronicity stories so far – right time, right place, right person, right vision etc. Holly and I ‘connected’ to what would be the appropriate original frame design concept and we were supported by her colleague Amanda. During the process, Manager Dean also recognized the emotional significance of the picture and ensured the ultimate right assembly was accorded. I am grateful to all three for the end result. 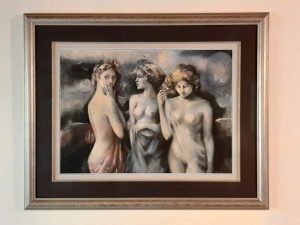 The framed picture of The three Graces

And then a good neighbour appeared for me to have my angst removed and together, Andrew and I rested my very own Nadia’s Le Tre Grazie in our home. 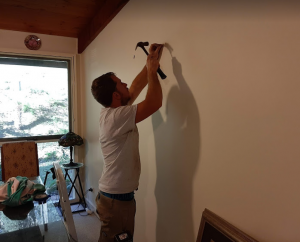 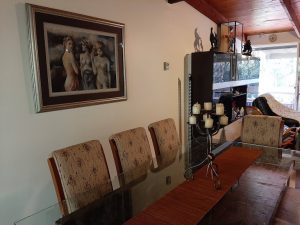 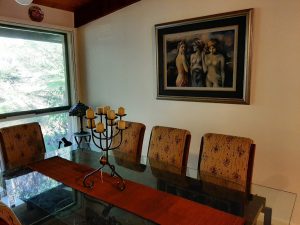 “Le Tre Grazie” (The Three Graces)The accompanying photographs in this post, with permission from my dear friend Luciana, share the story of how Nadia Caleca’s Three Graces come to be in my valued collection of treasures. 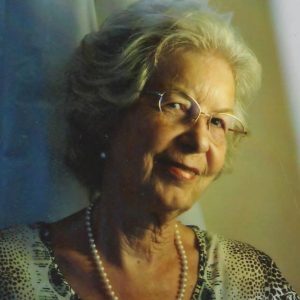 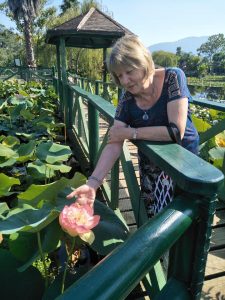 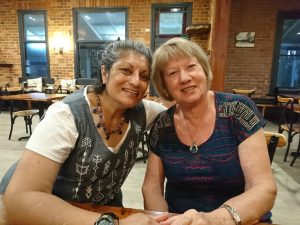 My wife Pauline with Luciana

Yes, values do indeed add to our experience of life and how we contribute to life’s experience!